Some of our famous Gaol Characters

The following stories about the executions, inmates and officers of the Adelaide Gaol can be read in the various publications sold by the Adelaide Gaol Preservation Society Inc. A comprehensive listing of these books can be viewed on our Gaol History page. 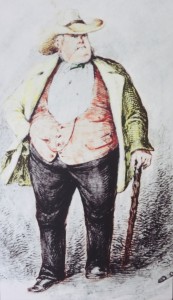 William Baker Ashton was the first Governor of the Adelaide Gaol. He was appointed before the Gaol was built and held this office for 15 years from 1839 to April 1854. At one time the Gaol was known affectionately as “Ashton’s Hotel”.

Ashton died one night while in office at the Gaol. The next morning when he was found, rigor mortis had set in making it impossible to bring his body down the steep narrow staircase from his apartment and he had to be lowered from an outside window.

Maybe, as a result of this embarrassing exit, Ashton is still trying to enforce his authority in the Gaol. It is said that his ghost continues to haunt the Gaol.

Charlotte Ashton arrived in the colony of South Australia with her husband, William Baker Ashton (first Governor of the Gaol) and three children in 1839.

Charlotte worked alongside William in the capacity of Gaol Matron. The role she occupied was unpaid until 1850 when she was officially appointed as Gaol Matron. During this time she gave birth to three more children.

William’s untimely death in April 1854 forced Charlotte to leave the Gaol and seek alternative accommodation. An appeal to raise money for her family resulted in Charlotte obtaining land at Leasingham which she and her sons farmed.

In 1868 Charlotte was granted the licence for the Leasingham Hotel.

After a long illness Charlotte passed away on 29th July, 1894 and was buried in the Auburn Cemetery.

Executions at the Adelaide Gaol

In addition to the following, there were five public executions in Adelaide and sixteen executions in various South Australian country locations.

Elizabeth Lillian Woolcock was the only woman executed in South Australia. She was convicted of the murder of her husband in 1873.

Elizabeth was born in Burra in 1847. At the age of four she was deserted by her mother and left to grow up in the early Cornish mining villages around Moonta. Her life was dominated by the cruel working conditions, a squalid home life and the fiercely evangelical brand of Wesleyanism.

She was married to Thomas Woolcock on 18 February 1867. The marriage was not a happy one. Thomas drank to excess and was also demanding and abusive.

Thomas died under suspicious circumstances on 4 September 1873 after several weeks of illness. A post-mortem established his cause of death as mercury poisoning. The Coroner’s inquest determined that Elizabeth had sent her stepson Tom, under a false name, to buy mercury compounds from local pharmacies. She claimed that she required the compounds to treat head lice.

At her trial, damning medical evidence was presented to show how Elizabeth could have been poisoning her husband over a long period of time. The court also heard testimonies from townspeople about Thomas’ symptoms, their unfortunate marriage and Elizabeth’s reputation for unruly behaviour. Much of this was nothing more than malicious gossip.

Defiant but inarticulate, Elizabeth had little chance of winning the case. The jury took less than half an hour to find her guilty of murder, but because of her youth they recommended mercy. This recommendation was ignored.

A fortnight before her execution, Elizabeth wrote a rambling confession which gave a sad account of her early life and marriage. She wrote that in an evil hour she had yielded to Satan’s temptation, but would die “washed white in the precious blood of Jesus”.

Even in 1873 her punishment was considered harsh. Many regarded her as the victim of a harsh and deprived upbringing rather than a violent criminal.

Elizabeth was the only woman to be executed in South Australia.

John Balaban was convicted of one of South Australia’s most sadistic killings. He confessed to killing five people in as many years.

He also savagely attacked a prison warden while awaiting execution in the death cell at the Adelaide Gaol.

John Balaban was executed by hanging at the Adelaide Gaol on 26 August 1953.

His body was interred in the Gaol between the walls in ‘Murderer’s Row’.

Glen Sabre Valance was convicted of shooting his former employer, Richard David Strang, with a rifle while Strang lay sleeping with his wife. Valance added to his crime by then raping Strang’s wife as she lay alongside her husband’s body.

It was claimed that Valance should have been acquitted on the grounds of insanity. At this time, public opinion was building against hanging and there was a world trend toward the abolition of capital punishment.

Glen Sabre Valance was hanged on 24 November 1964. Valance was the last man to hang in South Australia and the second to last in Australia.

Read about other Adelaide Gaol characters and their stories.

Visit us regularly to learn more about the Adelaide Gaol’s interesting past.

Sarah Francisco was born in Ireland around 1839. She was the daughter of a blacksmith. Her mother died when she was five and she was sent to live with an aunt on a local dairy farm.

The potato famine which devastated Ireland in the decade from 1845 caused over two million people to emigrate and seek a better life. Sarah’s elder sister emigrated to Australia and Sarah followed her shortly after. She arrived in Port Adelaide aboard the Peerless on 7th November 1866. A year later she married John ‘Frank’ Francisco, a seaman from Genoa at Saint Patrick’s Church in Grote Street, Adelaide.

The marriage was an unhappy one. Her husband was violent and a heavy drinker. He once tried to throw Sarah down a well and several times attempted to poison her. She carried a scar across her mouth which was the result of her husband hitting her with a brass candlestick. He took to his bed for three years after coming home one day complaining of a pain in his ankle. When a doctor recommended a two week break away from home, Frank left and never returned. Sarah never saw him again.

The marriage had produced two sons, Joseph and John. Sarah had a passionate love for her sons and she took on the task of sole breadwinner. Setting off at 3.00 am every morning with one child in her arms and the other on her back, she cleaned hotels until 11.00 pm, or took on any job that would keep the three of them fed and clothed.

A tragic accident which resulted in the death of her beloved five year old son John was the beginning of her downward spiral into drunkenness.

Sarah soon became one of the Adelaide Gaol’s most notorious inmates. She amassed a total of 295 convictions resulting from her drunkenness and unruly behaviour. Her first conviction was in 1872. Subsequent convictions included drunkenness, indecent language, assault, resisting arrest, riotous behaviour, abusive language and disturbing the peace.

Sarah had her ‘own cell’ in Adelaide Gaol’s 2 Yard. When Sarah arrived in the Gaol she would ‘evict’ the current occupant of ‘her cell’ who then had to find alternative accommodation. On one occasion she threw a tantrum and kicked a prison officer because she couldn’t have her usual cell. Her behaviour earned her another 14 days in gaol.

Sarah spent over 16 years in Adelaide Gaol in short sentences, she was sentenced to 12 months five times and spent 12 Christmas Days in gaol. Many of her sentences were served concurrently. If she had served her full terms of imprisonment she would have spent over 180 years in gaol!

Although she had relapses she was never arrested again.

Sarah died on 2nd November 1916 at the age of 77 and is buried in the Cheltenham Cemetery.

Rupert Maxwell Stuart was an Aranda Aboriginal who was tried and convicted of the rape and murder of 9 year old schoolgirl Mary Olive Hattam on the 20th December 1958 at Thevenard near Ceduna.

The illiterate Stuart was sentenced to the gallows; however he was reprieved seven times, once only hours before facing the noose. During the following 12 months the case became one of the most sensational in SA’s criminal and political history. The News, one of South Australia’s newspapers, spearheaded a campaign to take on the might of the judiciary and State government in an effort to get justice for Stuart.

A Royal commission was eventually held to appease a divided population. The Royal Commission found the case against Stuart was valid but the then Premier Tom Playford commuted the death sentence to life imprisonment.

Stuart served most of his time in Yatala Prison. The time he spent at Adelaide Gaol was mostly while his parole breaches and sentencing was being reviewed.

Stuart still maintains his innocence, claiming the confession was ‘bashed’ out of him by the police.

You can see Stuart’s cell in 4 Yard.

Sister Mary MacKillop. An enormous amount has already been written about Mary MacKillop, Australia’s only saint. However, many people are not aware of her association with the Adelaide Gaol.

Mary MacKillop and the Sister’s of Saint Joseph were often seen at the Gaol and had an influence over the prisoners that no other agency could command. They helped to reform prisoners and deter them from a life of crime. Many female prisoners were helped with practical housekeeping instructions and taught sewing, cooking and knitting. This gave them an alternative means of employment to that of prostitution. 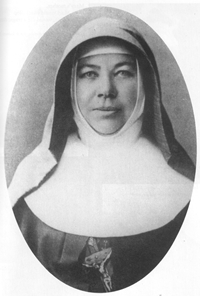 On one occasion, Hugh Fagan, a man convicted of murder and sentenced to death, lost control when he was visited by a doctor and a priest prior to his execution. He was so distraught that he had to be chained down.

Mary MacKillop and sister Felicitas visited Fagan although they had been warned not to. The two nuns knelt and prayed in Fagan’s cell and as they did so Mother Mary began to cry. Although he had been very abrupt with the nuns at first Fagan was moved by Mother Mary’s grief and knelt beside them and joined in their prayers.

Mother Mary convinced Fagan to allow a priest to hear his confession and to receive Holy Communion.

On the day of Fagan’s execution Mother Mary offered to climb the scaffold with him but the authorities would not allow it.

Another prisoner ‘Scotch Bella’ was also helped by Mary. Later, when ‘Bella’ was released from gaol she went to live under Mary’s protection. Later she was baptised, married and went on to lead a positive and productive life.

The Salvation Army, from its inception as a Corps in Port Adelaide in late 1882, was often to be seen ministering in lockups and prisons around the state.

The Adelaide Gaol was no exception. The Salvation Army held regular services in the Gaol Chapel and spent many hours visiting prisoners and offering comfort and advice to any who required their help.

During their association with the Adelaide Gaol, The Salvation Army helped many prisoners and ex-prisoners reform from either alcoholism or criminal activity.

Booking your Adelaide Gaol tour is quick and easy with our online booking system.

A maximum of 20 persons for each tour.